Leading the Industry in a New Way

This stock is a natural next step in the relationships we've established and grown over the years with our trusted manufacturers, informed by clear, honest communication and mutual trust.

We'll phase in this arm of our sales in three geographic stages⏤Central, Eastern, and Western United States. Our Central U.S. sales component is stocked (and actively selling!), with a selection of mobile hydraulic yard ramps and stationary dock ramps.

Your advantages are threefold:

As you'll see on the accompanying map, a 250-mile radius around each of those locations covers parts or most of 18 states.

That 250-mile radius translates into reduced delivery times and lower freight cost for your company.

As we soon launch our in-stock inventory at strategically located depots in the East and West coast regions, we'll soon have a vast majority of the country covered with accessibility, timeliness, and price point on new yard ramps.

This is all a natural extension, and terrific layering on top of our industry-leading sales and rentals of used mobile yard ramps and stationary dock ramps, which already has our inventory positioned within 250 miles of 90% of the U.S. population.

This week, our man McCoy Fields digs back into his archives and applies his eccentric perspective screw and levers and kinematics and a guy named Franz.

A Smooth Angling of Your Purchase

We inspect all of our inventory to assure quality for your rental or purchase. And if it’s in your means, there’s nothing like a new forklift ramp. Unaffected by rust (naturally occurring, and most always nothing to be concerned about), a new one will give you those extra years of workhorse service.

The Yard Ramp Guy’s Online Store lists our new inventory in two main categories: New Mobile Yard Ramps and New Stationary Dock Ramps. And when you conduct your comparison shopping with other manufacturers and sellers, you’ll most often notice a couple of Yard Ramp Guy distinctions. Here, then is some handy Q&A:

How does The Yard Ramp Guy sell new ramps for less than the factory?Manufacturers often sell direct to end-users but honor the 800+ dealers around the country by committing to not going below the standard dealer’s retail price point. As far as pricing goes, we are competing against other dealers or the factory selling at dealer pricing.

We have no bricks and mortar. Our overhead is very limited. Our web presence funnels all the leads we could hope for, so our marketing budget is lean. Rather than pricing along with other dealers and pocketing the additional profits, we pass the overhead savings on to our customers to win their business.

Why does The Yard Ramp Guy feature only three yard ramp manufacturers?
The three manufacturers featured—Bluff Manufacturing of Ft. Worth, Texas; QMH of Rancho Cucamonga, California; and Mid-State Ramps of Denton, North Carolina—each make outstanding quality products and are the leading makers of yard ramps.

There are a few other manufacturers making quality products but not, in our opinion, with the same commitment to the vertical product line. They also sell at price points beyond our business model. We also would have no hesitation to re-sell one of their ramps as used.

What happens when my new forklift ramp arrives?
Not to worry. About half of our customers request some or all of our Turnkey Delivery and Installation Services. Many of our customers don’t have the skills or time to manage aspects of installation such as offloading the ramp from a flatbed, anchoring the ramp to docks, or spot welding.

More questions? We’re here to help you and the efficiency of your business. Give us a call:

This week, our man McCoy Fields stays in space (apparently, sometimes he’s late to dinner) and—no surprise here—questions the ramps they use in Star Wars and Star Trek.

What does evolution have to do with industrial yard ramps?

In 1972, paleontologist Stephen Jay Gould co-wrote a paper on what he called punctuated equilibrium.

In a nutshell, Gould challenges Darwin’s idea that evolution happens gradually over time. Instead, punctuated equilibrium attempts to redefine evolution as a process that remains static for long periods of time, with sudden spikes in change.

For example: how did life move from water to land? Punctuated equilibrium’s approach is that after a long stretch of time in which the bigger fish were eating the smaller fish, the smaller fish suddenly had enough and thrust themselves onto the shore. To, you know, avoid being dinner.

From there, picture the gills morphing into arms and legs, the spine strengthening and branching out, and the eventual jump from being on all fours to standing on two legs (followed by, say, starting your own industrial yard ramp business).

In industry, we have what we’ve come to call disruption—say, manufactured things, technology, and software that create spikes in the marketplace.

While disruptions aren’t always cheaper—or necessarily better—they do affect our purchasing decisions, and that has a direct effect on supply and demand.

Which brings us to industrial yard ramps. History and anthropology suggest that the first ramps were made of earth, angled in such a way to allow transport up an incline in order to bridge distance and elevation.

Dirt turns to mud in the rain and affects integrity and safety. So, engineers adapted inclined planes over the centuries. Today, the best yard ramp functionality includes serrated grating: it provides excellent traction for forklifts, and the open design allows water and debris to pass through instead of pooling. All of which contributes to more effective safety and a smoother workflow.

Some of this disruptive innovation is borne of necessity, some of it from simple and often brilliant design tweaks (see our example of the paper clip, HERE).

Just because you can doesn’t always mean that you should. In our view, the best disruption incorporates both design and safety. With those two elements—especially in our industry—you have the right ingredients for creating a better, more helpful product.

Proudly, we encourage you to keep watching this space for some exciting innovations. 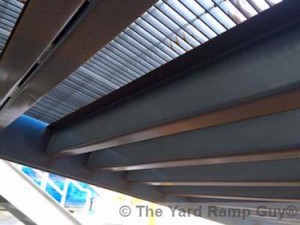 Picture an 18-wheeler filled with a heavy load of inventory—hundreds or thousands of pounds of it. And now picture no easy way to unload that inventory. No yard ramp. No loading dock. No easy access between the truck and the bay. Your team attaches chains to one of the pallets and pulls it to edge of the truck, where the forklift’s tines need to hook in and offload.

While forklifts are designed for stability on flat surfaces, the right yard ramp with a proper incline allows for quicker load and offload—safely and more efficiently. A good yard ramp enables your entire operation, from crew safety to being on time with delivery, to become more streamlined.

New or used, a quality forklift ramp will have these elements:

Another consideration: does your operation require a portable yard ramp, or do your logistics allow for a fixed platform, without wheels, where you can readily move inventory to and from the platform?

With ten depots strategically located throughout the continental United States, most of our inventory of used yard ramps and platforms sit within 250 miles of 90% of the population. That means reduced reduce freight costs. 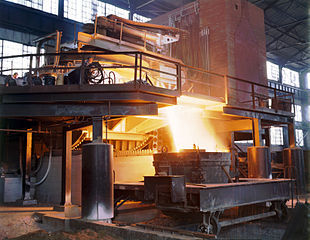 The Yard Ramp Guy prides itself on customer service. We’re keenly interested in exploring your requirements with you to assure that your business leverages an optimal solution to streamline operations.

A major consideration when buying or renting a yard ramp to help optimize your business operations is the choice of main material. Steel and aluminum yard ramps: which do you go with?

First we fold in the cost factor. The two major cost variables are raw materials and labor.  While the labor cost to assemble steel and aluminum ramps are quite similar, the raw materials are not.  Current steel prices are around $500 per ton; aluminum prices are in the $1,770-$1,800 range, a price difference that adds a lot to the final price of aluminum yard ramps.

One of aluminum’s greatest qualities is that it is not prone to corrosion or rust.  It's also the material of choice in operations where highly combustible materials are being produced, as steel is more prone to produce sparks.   Steel yard ramps will need periodic maintenance (painting or treating), especially if logistics require your business to have the yard ramp operating outdoors in parts of the country prone to weather extremes throughout the year.

That said, steel yard ramps will also last for a longer period of time than aluminum. This may be the pivotal factor in determining which material you choose for your yard ramp.

Another consideration is in capacity, which differs greatly between aluminum and steel. As a lighter material, aluminum yard ramps are usually built to hold a maximum of 16,000 pounds. Steel yard ramps are more solid and typically hold up to 25,000 pounds. This 9,000-pound differential may make your decision much easier.

Welcome to Our Blog!

We invite you to provide feedback and requests for specific blog topics at Info@YardRampGuy.com