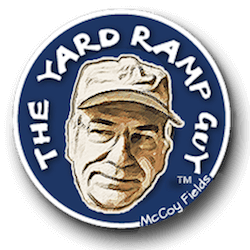 I’m very proud to present McCoy Fields as an official licensee of The Yard Ramp Guy®.

From a simple Internet search about a year ago (well, “simple” for me was about Page 25 of my Google search results), I discovered McCoy’s site, The Ramp Rules, and instantly became hooked.

He blogs there about once a week, waxing about everything under (sometimes over) the sun. Then there’s his Facebook page. And his Tweets. (I heartily encourage you to Like and Follow him there. I think you’ll be entertained, educated, and amused by his worldview.)

I must admit to the oddity of discovering someone that passionate about ramps who’s not in the business of ramps. By day, he’s an operations manager at some commercial distribution center, so he does interact with them, though they’re not what he does. He’s just obsessed with ramps and what he calls “their sheer and fairly simple brilliance.”

In all my years of interacting with thousands of people, personally and in business, I’ve never come across anyone quite like McCoy. He’s one of the smartest, wittiest characters I’ve ever encountered. He’s kind. He’s eccentric beyond belief 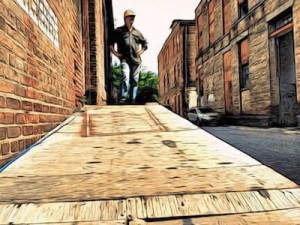 It’s impossible to have a dialogue with McCoy about one thing; he begins discussing ramps, and he suddenly veers into a series of tangents on pyramid construction, space elevators, funiculars, and Kinematics. And then, like a verbal magic trick, he ties it all together by looping back around to ramps.

I really think McCoy Fields is the last of the Renaissance men.

Asking him to become a Yard Ramp Guy licensee seemed to me and my team like a perfect—and perfectly natural—partnership. When I floated the idea, McCoy said: “Well, Jeff, I’ll need to think about that. Whups, gotta go. Bye.” Frankly, I thought I’d offended him—without a clue why.

Yet, half an hour later, McCoy contacted me to apologize for being so abrupt and explained that “gotta go” simply meant that he had to use the bathroom (“When you gotta go, you gotta go,” he said).

That, of course, prompted his (relatively) brief thoughts about gravity, the possibilities of reducing gallons per flush, the politics of water conservation, and something called the angle of friction.

Which, naturally, led to berms and inclined planes. Suddenly, he veered into an appreciation of my business model (he’d spent the previous 20 minutes reading through our website) and then took a quick right turn into his nonnegotiable conditions for becoming an official licensee of The Yard Ramp Guy:

Being a licensing thing, we required his face (in caricature) on our logo for his social media.

We really like McCoy’s ability to present complex ideas in a completely understandable manner. And his Paul Bunyan-like preference for human ability. And his measured appreciation of technology. And his curiosity and sense of humor about the oddities in the universe. And his obvious pride for his family. And…well, we like the guy.

Welcome aboard, McCoy Fields. The ramp may rule in your world, but we think you’re steering the boat.

Welcome to Our Blog!

We invite you to provide feedback and requests for specific blog topics at Info@YardRampGuy.com